I’ve really not been shy about mentioning it on this list, but 2016 has been an absolutely standout year for horror. (No, I mean horror movies not… you know what never mind) Conjuring 2, Lights Out, The Wailing, Oujia, Don’t Breathe and many more horrors came out this year, all of which have made strong critical waves. But out of all those movies, the one that genuinely scared me the most by far was this little film about a mother and daughter haunted by an evil spirit in wartorn Tehran. Seriously, I watched it at home with the lights on and I had to pause the video a couple of times to catch my breath, it was that unsettling. Seriously, this might personally be the most terrifying film I’ve watched since the Shining.

Funnily enough though, the movie’s biggest strength is actually probably the least scary part about it. Specifically, I’m talking about the build-up. Nothing really openly scary happens for the first half or so as we get to know the characters and setting in this little wartorn apartment building. Indeed it could easily be mistaken for a well-written drama. But as the movie goes on, the tension begins to build, more and more people leave the apartment building and our protagonist becomes more and more isolated. Then, when the scares start to come, they come heavy and fast. One particular moment, not even a jump scare, caught me off guard very early and the movie kept up that pressure, creating a constantly unsettling mood where anything feels like it could happen.

Now, I will admit it’s not perfect. Some of the build-up does get a bit boring and there a couple of silly moments in the climax. Plus the kid is a bit annoying (albeit deliberately so, like in the Babadook). But if you get sucked into its atmosphere, it gets downright chilling once it gets going. I don’t think it’ll necessarily be for everyone, but I would still more than recommend it.

Yes, this’ll probably get some controversy. Me, on the other hand? I’m just glad we finally have a decent parody movie again. Seriously, after years of Seltzer/Friedberg shit, I have been damn worried for that particular genre these last few years. And it’s a shame too because I love classic parody movies, from Airplane! to Hot Shots to Mel Brooks at his prime. And this movie definitely feels like a Blazing Saddles for the superhero genre. It’s not afraid to be gross, to play with the worst excesses of the genre, to fire a joke at you every minute (even if some don’t necessarily land), yet it still doesn’t feel overly-mocking or cruel towards the genre as a whole. It recognises itself as a superhero movie and has fun with all that entails, rather than simply paying half-assed lip service like a Seltzer/Friedberg movie.

I don’t really think it needs to be said just how well Ryan Reynolds encompasses this role. He’s been championing this movie for several years now and he utterly blows it away, capturing the wise-cracking irreverent tone of the character perfectly. He pretty much makes the movie work with excellent comedic timing and voice work to compensate for what can’t be seen through the mask (although they did a damn good job at making that mask expressive). The rest of the side cast is solid and do their job more than admirably, although I think the villain could’ve worked with either being more funny or more serious (to better contrast with Deadpool’s Deadpoolishness). As it is, he just kinda comes off as punchably smug which while not necessarily bad, was a definite missed opportunity and one of the weaker points of the movie (although the dishsoap line never fails to make me laugh).

That said, it doesn’t change the fact that, aside from one other fairly-easy-to-guess movie, I laughed at Deadpool more than almost any other comedy I saw this year. Which is honestly fairly rare for me since I usually hate R-Rated comedies. If it’s not your sort of movie, I can understand, but I had a lot of fun watching this and am eagerly awaiting the sequel (albeit not the flood of inevitable imitators attempting to cash in).

Also if this is controversial for you, you are not going to like my No 5. 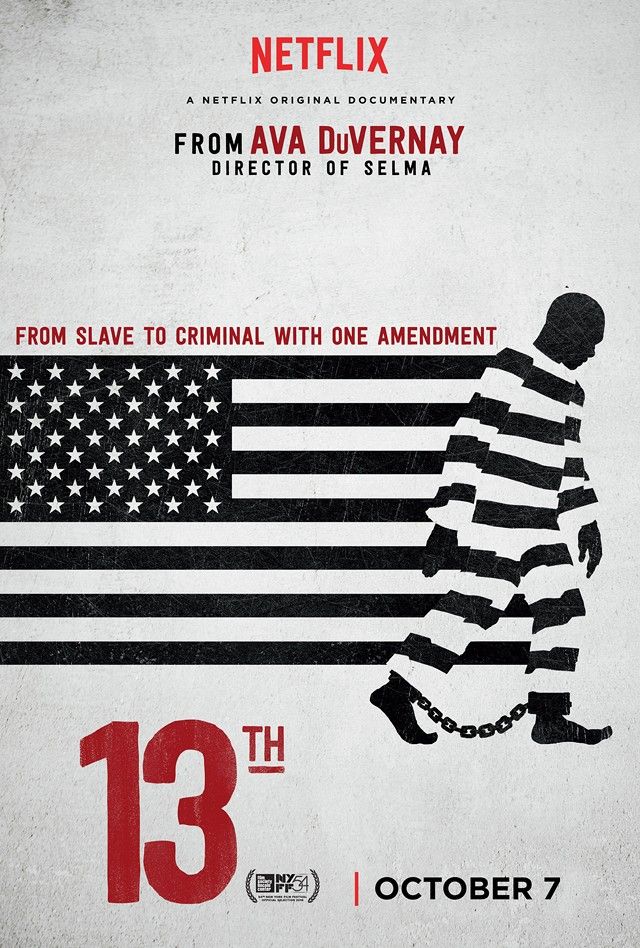 What’s this? A documentary in my Top 10? Damn straight. I saw this movie at the London Film Festival on a day where I hadn’t slept for nearly 24 hours. I was still utterly engrossed and alert from start to finish. It’s damn good and, like Zootopia, incredibly relevant in this time of racial strife (especially since things don’t look like they’ll be getting any better any time soon.)

Honestly, I think, if you’re trying to deliver a message, the best sort of documentary is the kind where the audience can see actual parallels and examples from their own lives and experiences without the film needing to outright point it out. I don’t know exactly when the film was completed and how much of the election season rhetoric had been taken into account during writing but there were so many real-life examples I could think of from recent news that mirrored exactly what the film was laying out on screen. It was honestly unsettling, especially since it was my own mind that was directly making these comparisons, not the film.

But even aside that, I’m not an expert on documentary filmmaking, but Ava Duvernay does an exceptional job at keeping your attention throughout as she carefully and thoroughly explains each of the points she makes, using plenty of real life examples and simple-to-understand reasoning. Like I said, I was really tired when I started watching, to the point of nearly nodding off while waiting for the movie to start, yet the movie kept my interest throughout. And that’s damn impressive.

So, in conclusion, an excellent and gripping documentary with a message that is quite frankly essential to hear, considering how relevant I suspect it will be in the next 4 years.

I’m saying it now, going in, this movie felt like it was made for me. Whiplash was my favourite movie of 2014 and I have a fairly understated love for the movie musical. To be perfectly honest, the No 1 spot this year was this movie’s to lose…. which it kinda did. But not by that much.

I’ll admit I was a bit apprehensive when I went into the theatre. After all, when you see a movie as highly praised and seemingly perfect for you as this film, there’s always going to be the worry that you’ll dislike it. But from the very first music number, this movie had me grinning like a maniac in my seat. And almost every musical number afterwards blew me away. I’m serious when I say I really love a good goddamn musical and this pushed all the right buttons for me. The choreography was great, the colours gorgeous, the energetic songs energetic, the more pensive songs pensive, it all just worked for me. Gosling and Stone had excellent chemistry and pretty much made the characters. And while I’ve heard a lot of complaints about their characterisation being ‘thin’, that’s always struck me as ‘Fury Road has a weak plot’ sort of silly criticism. Yeah, they’re not amazingly complex characters, but they’re not meant to be, in the same way that the leads in movies like Singin in the Rain aren’t meant to be. This movie is about its style and music and the plots and characters are more designed to compliment and work off that style. And I thought they did a more than admirable job, especially elevated by the given performances.

That said, while I enjoyed the hell out of the first half or so of the movie, moving into the second half was where I started to have problems. Specifically in that the movie felt like it was trying to have its cake and eat it too. It was trying to be a fun, light, grinning-in-the-seats movie musical like Singin’ in the Rain, but it also wanted to be a moodier, introspective Oscar film. Thus we have what feels like a disconnect between the two halves of the film as one half is flighty and fun and the other half is dourer and darker. And it never quite felt like a natural enough transition for me compared to something like, say, Wolf of Wall Street. Not to say either half is bad, by no means (although I much prefer the first half) just that they don’t quite fit together.

That said, it’s still an amazing movie and (almost) everything I wanted from it. Hell, I still have half the songs from it on my ipod…. although I also have the theme from Digimon on there so maybe that’s not the best indicator of quality…

Also, sorry Gosling, but I’m still not that fond of Jazz.

Considering how big of a fan I am of anime and that this is the biggest anime film of the year (and one of the biggest performing of all time) is it really a surprise to see this movie this high up? Funnily enough though, this is actually the first Makoto Shinkai movie I’ve ever really watched. Generally I’m not fond of drama/romances (animated or live-action) and since his filmography is largely made up of them, I’ve never really gotten around to watching any of them. Now? Well, let’s just say I’m seriously reconsidering that. Because this was amazing.

It was funny, cute, with excellent writing, voice acting and directing (both dub and sub). And the animation? The animation is absolutely gorgeous and lends the story a gravitas and weight that I just don’t think you recreate in a live action movie. Really, I am so glad I saw this in a theatre rather than on a home video release. Don’t get me wrong, you could probably remake this movie in live action just fine, it’s a simple enough story. But I don’t think that even for a second that you could recapture the same sort of beauty or magic that this movie gives itself. One particular climactic scene on a mountain’s edge at twilight is just a thing of awe, thanks to both the animation and the excellent build up lent by the story and the writing.

Honestly, the only reason this isn’t No 1 of the year is that it does start to feel a bit sluggish towards the end and some scenes overstay their welcome. But it’s still an absolutely fantastic movie and exactly the sort of thing I like to see animation accomplish these days. Shame it got snubbed from the Oscars though…

But it’s also still not my highest ranking animation of the year. That has yet to come…