Part 2 of my grand countdown. Also the part that will probably piss people off the most. Going after a few decently liked gooses here. Fortunately that doesn’t include this first one… 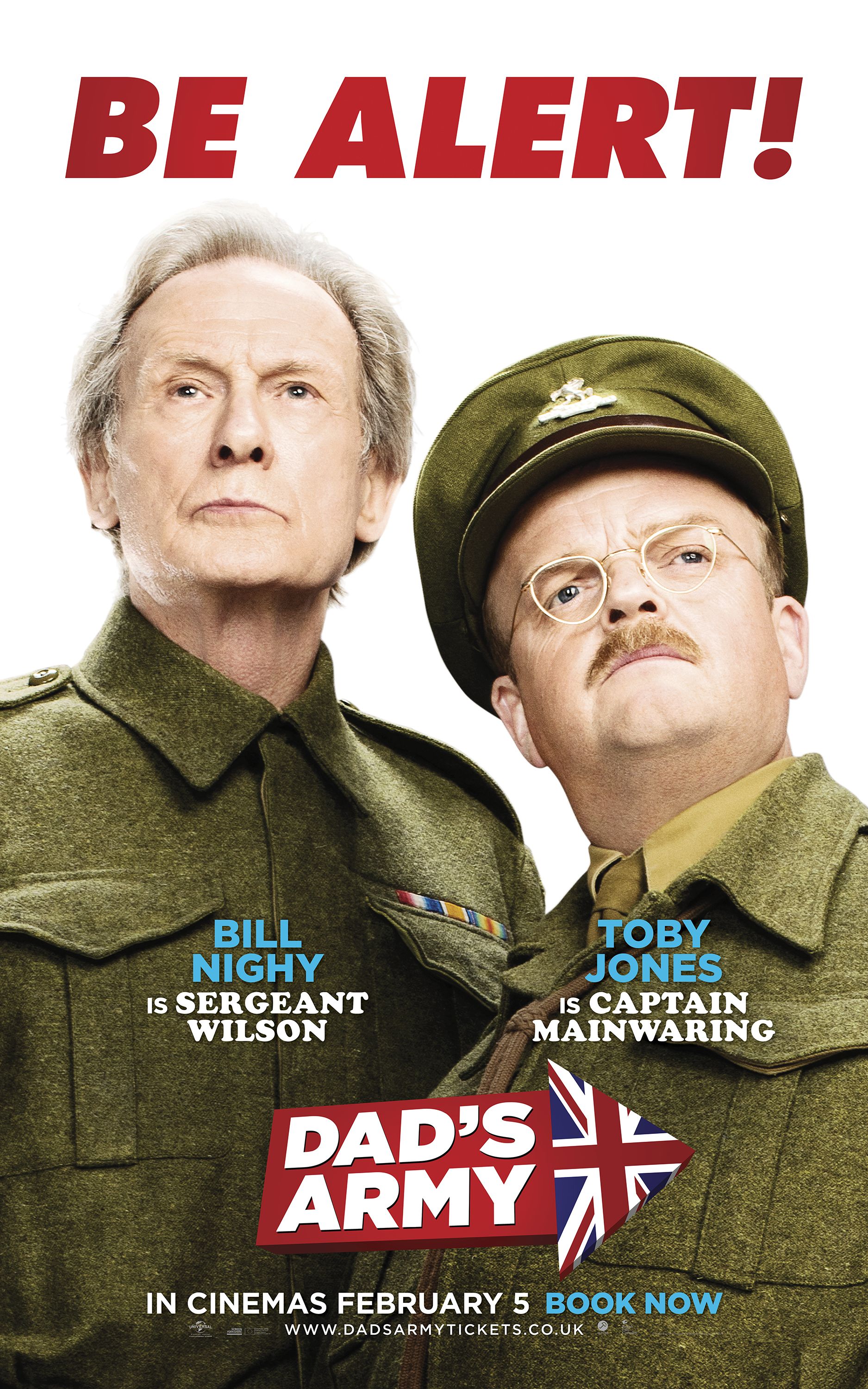 Okay, those of you in America/outside of Britain may be wondering exactly what this is. Dad’s Army was a British sitcom than ran in the 1960’s/70’s about a bumbling group of British Home Guard soldiers during WWII (The Home Guard largely consisted of local volunteers otherwise ineligible for military service and thus remained in Britain). It’s largely considered a classic sitcom in Britain and I myself watched it quite a lot when I was growing up. (Not the original run, mind. It was put on repeat a lot. I’m 21, not 50.) So I will admit to possibly having some nostalgia goggles on, but believe me when I say that this modern adaptation is a piece of horse shit.

There are a lot of problems with this movie, from the predicable story, to the flat jokes, to the ridiculous finale, but I think the main reason it failed to capture the spirit of the original series is that it feels a bit too… well… cinematic, if that makes sense. The original series had a grounded British charm that worked because the jokes/characters/story was very down to earth and simple. This movie feels glossy, overly-Hollywoodised with a ridiculous climax that turns the aging bumbling characters into action stars. It just does not work and misses the magic that made the original series so enjoyable.

Like with Suicide Squad, I’ll give definite props to the actors for trying their hardest, but they couldn’t save this lousy movie.

Sigh. This movie had everything going for it to be fantastic. A classic Roahl Dahl story. Mark Rylance starring. And of course, Spielberg at the helm. So why did it end up as such a bore for me?

If I had to guess, I’d say it honestly feels a bit too… juvenile. And I know that’s kind of a silly complaint coming from a kids movie, but Spielberg has more than proven enough in the past that he’s capable of creating kids movies that adults can enjoy just fine. Here though? Not so much. The BFG is pretty much a one joke character and that joke is that he makes up the most dodictiosly malligamatic words from whatever jumps off his cranium. And while that’s charming in a short children’s book, it’s something that gets old very fast in a full feature film (Christ, it got old while I was typing it out). It’s also difficult to take the giants at all seriously as antagonists when their first scene is complaining about a ‘boo boo’. And the climax with the Queen, while again hilarious for a short kids book, comes off as a massive anti-climax narratively and the movie’s attempts to milk tension and drama from the BFG deciding to reveal himself just felt forced.

Now again, sure, you can knock me for complaining about childish elements in a kids film, but the movie quite clearly tries to have it both ways. There are several scenes that are meant to be atmospheric and appreciated by adults as well as kids, such as the wishing tree or the fate of the BFG’s last friend. But the problem was, I’d been turned off so much by everything else that none of those moments resonated with me the way that the film clearly wanted them to. Instead, some of those scenes just came off as incredibly dull.

63. Fantastic Beasts and Where to Find them

Welp, I’ve already pissed off all the DC fans, might as well take some shots at the Potterheads as well. Honestly, I’m actually a relatively big fan of the Harry Potter book series, but the movies have always left me a little… well… cold. They’re good movies, mind, no doubt about that (Hell, I’d call them one of the better adaptations of a novel series out there). But like with the first two Hunger Games, while there was a lot of stuff I did like, I just never really connected with them in the way that I do with a lot of my favourites. (Except, oddly enough, I really enjoyed Philosopher’s Stone and Chamber of Secrets, which some people demean as the worst in the series.)

This movie on the other hand… is not very good. It suffers from what has been a relatively common problem in a lot of lousier blockbusters this year. Too much plot. Really, the movie should’ve just been about finding the titular Fantastic Beasts, but the movie insists on shoving in another story about a reused Dementor effect- Sorry, I mean ‘an Obscurus’. And then there’s stuff about Grindelwald and Dan Fogler wanting a bakery and some political BS about No-Majs and a wizard/witch hating cult and etc etc. And, quite frankly, the movie just doesn’t have room to flesh them out properly. It’s especially bad because, like with several of the plots in BvS, The Fantastic Beasts story and the Obscurus story never really interact for 90% of the movie. Thus when the movie does try to bring the two sides together in the climax, it doesn’t work because half the characters have barely even met.

As for the acting, it’s a mixed bag. Dan Fogler brings a lot of charm and fun to his performance and Colin Farrell is effortlessly badass (to the point where I wish he was returning for the sequels), but I can’t say I was fond of the rest. Eddie Redmayne isn’t an actor I’m that fond of and plays the character as too introverted to really work as the movie’s lead, especially in a larger and more interesting ensemble. I get the impression they really should’ve gotten an actor like Doctor Who’s Matt Smith (who at times Redmayne felt like a weak imitation of), who can play odd and antisocial characters but with fits of manic energy and passion that would’ve worked so much better here. Ezra Miller is also pretty poorly miscast. I’ve accepted older actors/actresses playing teenagers before, but the ‘child Credence’ clearly looks 20-something in all his scenes and his design makes him look too emo to really take seriously. Also, someone get a tissue for Katherine Waterstone because she is clearly about to burst into tears in every scene.

The directing is just bland, the CGI is obvious, the colour feels like it’s been sucked out and ultimately the movie feels too dreary and drab for what should’ve been a relatively exciting romp through a new side of the Wizarding World. I mean, a movie about finding mysterious beasts let loose in New York seems like it should be a fun affair, but the movie seems so desperate to tack on this other dark, serious, major story in the Harry Potter mythos that just does not fit to the point where the two sides are actively hurting each other in their search for a middle ground. The fun Beast-finding adventure feels too dark and dreary and the dark, serious Obscurus story feels too goofy at times and lacks the time needed to give it actual weight.

So yeah, as far as franchise starters go, this was not a good one. Mainly because it didn’t know what it wanted to be. A fun exploration of magical beasts or a dark mythological story with far-reaching implications across the magical world? Pick one or the other because it can’t be both.

Yeah, this is pretty much the Princess Kaguya of the year for me. Aka, that one foreign animated movie that everyone else who sees it adores completely and I really probably should like but for one reason or another it just simply didn’t work for me. Which is a shame because it was one of my more anticipated films of this year.

See, the thing with this movie is that it’s very much about the atmosphere it tries to create. There’s zero dialogue, a fairly basic score and the animation, while very nice, is also very simple. It’s clearly trying to create an otherworldly sort of atmosphere and I’m certain, if you manage to get into said atmosphere, you’d probably enjoy it a fair bit. But if you don’t get into it, like I didn’t, it… well… kinda comes off as unceasingly dull. The drab colours, the basic characters, the somewhat repetitive scenery, I just ended up getting bored. It’s kinda telling that my thoughts when walking out the cinema weren’t about the clearly supposed-to-be-heart-wrenching finale. Instead I was wondering why exactly was the turtle was bugging him in the first place. And yes, I got that it’s supposed to be a fairy tale/mythological-styled story where such questions don’t really need answers. I’ve watched other movies that did the same and accepted them straight off. But because this movie didn’t draw me in properly, my mind just kept getting drawn to the imperfections and unanswered questions. Now, despite with my relative detachment to the whole thing, I will admit there were a number of genuinely harrowing scenes in the movie, but those by and large felt massively overshadowed by the rest feeling dull and uninteresting. So yeah, that was a bit of disappointment for me.

However, despite this movie ranking this low on my personal list, honestly…. I’d still kinda recommend it. It is definitely something unique and worth watching and, while the atmosphere didn’t really manage to draw me in, I’d can’t deny it does have an atmosphere. Just not one that worked for me.

Boy, this movie sure… exists, doesn’t it? Yup, just goes right along there existing… Okay, I honestly completely forgot this movie existed until I saw on a list of films released in 2016. All I remember is that it had a great cast that was kinda wasted on a forgettable movie. It wasn’t Never Go Back bad, just not very good. And completely forgettable.