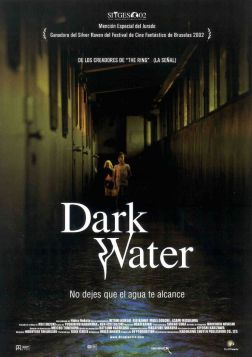 Premise: A recently divorced mother moves into a new apartment with her young daughter. However, they find that weird stuff starts happening. A large damp patch appears on the ceiling, hair is found in their tap water, a mysterious Hello Kitty bag keeps turning up around the place and the movie starts seeing a creepy ghost girl around the place.

Okay, first things first, I ought to admit that this movie kinda has a home-field advantage in regards to creeping me out. Mainly because, when I was very young, I watched a little movie called Ju-on: The Curse. In case you’re unaware, Ju-on: The Curse is basically the original Japanese version of The Grudge and, needless to say, it freaked younger me out a lot, to the point of having nightmares for weeks and a mild phobia of the dark that has persisted to this day. So, basically, to put it in Pokemon terms, stringy-haired Japanese ghost girls have a type-advantage against me that lets them hit for x2 damage.

Now, admittedly, this isn’t a universal thing for me. After all, I never really got all that scared watching Ringu and/or The Ring, in spite of both movies being classics in the ‘stringy-haired ghost girl genre, (although I did still enjoy them both quite a lot) and I spent more time laughing than shivering when I saw Kayako vs Sadako a couple of years back. (Which yes, is a thing that exists and is hilariously bad). But I still get pretty fucked up whenever I rewatch Ju-on: The Curse during a dark night, so it’s not exactly something to discount.

But anyway, the ultimate question is, how well does Dark Water hold up against its stringy-haired ghost girl peers? And the answer is, honestly, fairly well. It’s a pretty creepy movie.

I think one of the things that really makes it work well is the main setting. It’s a grimy rundown apartment building that feels increasingly decrepit and more and more ‘off’ as the movie goes on. It’s especially creepy when you realise that, aside from the main protagonist and her daughter, it’s more or less completely abandoned, with not a single other tenant anywhere to be seen. This creates a strong sense of isolation that makes all the freaky shit feel even more freaky than usual.

I’ve also got to give a lot of credit to the main actress, who does an excellent job as an increasingly harangued single mother simply trying to look after her daughter while more and more stress gets piled on her, both paranormal and regular. The movie itself puts quite a lot of emphasis on her personal drama and relationships and she does decent job of carrying it. Although it feels possible that the movie maybe puts a bit too much emphasis on that and maybe not quite enough on the spooks?

That’s not to say there’s not a lot of scares or spooky stuff going on, because trust me there is. There’s a lot of creepy shit that happens and some fairly good horror setpieces, especially towards the end. But I couldn’t help but feel that maybe it could’ve used one or two more big horror setpieces somewhere in the middle to help pace it out a little better. Because, as it is, it does feel a little light on the scares at a few points.

Still, it’s a good movie and I definitely enjoyed it a fair bit. It’s maybe not Ju-on: The Curse levels of creepy, but it was scary enough that, when I ended up having to do the dishes in the middle of the night not long after I finished, I was least a little bit unsettled about it. So yeah, it’s a solid Japanese ghost story. However, while it did scare me more than The Howling did, I can’t help but feel that the latter was overall a better movie. Either way though, it’s still worth checking out.

Was it Silly: Not really.