Premise: A retelling of Lewis Carroll’s classic Alice in Wonderland story, with a mixture of live-action and stop-motion puppetry. Also kinda fucked up.

Well, once again it looks like we have another unintentional three-in-a-row, although this time it’s animated movies… kinda? Technically, Alice (or Neco ze Alenky to use its original title) is less a traditional animation and more like Who Framed Roger Rabbit, where it’s a mixture of both live action and animation constantly interacting with each other, albeit in this case stop motion animation rather than more traditional fare.

In case you’re unfamiliar with this movie (as I suspect many of you are), I wasn’t lying in the premise when I said basically it’s a fairly faithful retelling of Alice in Wonderland. But, where both the original story and the Disney movie were more about the child-like whimsy, wonder and silliness of the world, this is more… well… uncanny. For example, this is what the White Rabbit looks like. 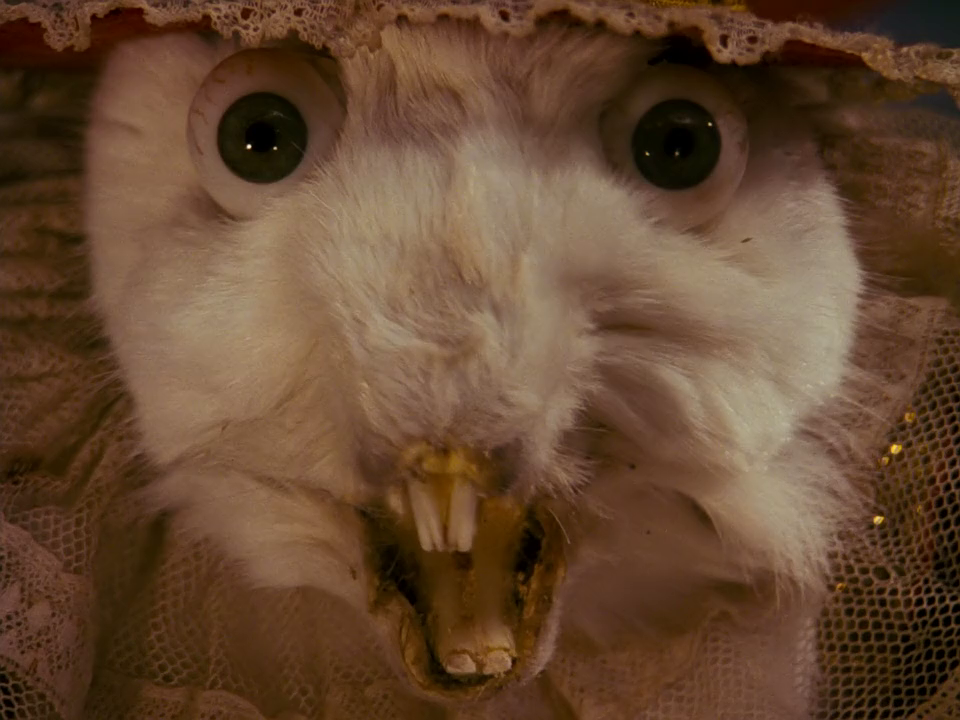 Yeah, if the original Alice in Wonderland is a fun LSD trip, this movie is more of a uncomfortable freak-out. Technically, it doesn’t really change all that much from the original story, it merely tells it in a different, more unsettling way. The settings aren’t so much magical wonderlands, but more reminiscent of abandoned old houses and attics, with chicken coop cages and taxidermy which doesn’t just fall into the Uncanny Valley, but actively seems to revel in it.

Now, there’s not much in the way of active jump scares in this film, but that doesn’t stop the movie from having a constantly unsettling off-kilter edge to it. There’s no score and the movie is largely ‘narrated’ by Alice herself, giving it the impression of a children’s story that’s not quite right. Like one of those cheap theme park animal costumes that’s ended up looking more unintentionally terrifying than huggable. But in this case, it’s fairly deliberately terrifying (at least I hope).

But honestly, this was actually a really fun watch. It’s not the kind of film I’ve really seen before all that much, but I definitely don’t regret seeing it. It’s unsettling and disturbing but in an entirely enjoyable way. Plus, there’s very little dialogue so most of the creep factor comes solely from the visuals and the deliberately disturbing animation and puppetry. So yeah, I’d give it a recommend.

Is it Scary?: Did you not see the fucking rabbit? Jesus!

Is it Silly?: Yes, but not in the way this category was intended for. (This is Alice in Wonderland after all.)