Pretty dang important year, actually. The Wall Street Crash happened, which led to the Great Depression, there were significant riots in Palestine, Stalin expelled Leon Trotsky from Russia and adopted a country-wide policy of collectivism and the infamous St Valentine’s Day Massacre happened.

It was also a pretty important year culturally too. Enrich Maria Remarque published the famous ‘All Quiet on the Western Front’ based on his experiences in WWI while Ernest Hemingway and Robert Graves did the same with ‘A Farewell to Arms’ and ‘Goodbye to All That’ respectively. Also famous characters like Tintin and Popeye made their first appearances as well as the first film about the sinking of the Titanic named…. Atlantic. (Which honestly just makes it sound like an Asylum ripoff, but whatever.)

Meanwhile, film-wise, I decided to try something a little different this time and tackle not just one, but two films (although one’s just a short film thankfully)… And they’re both a little on the odd side… 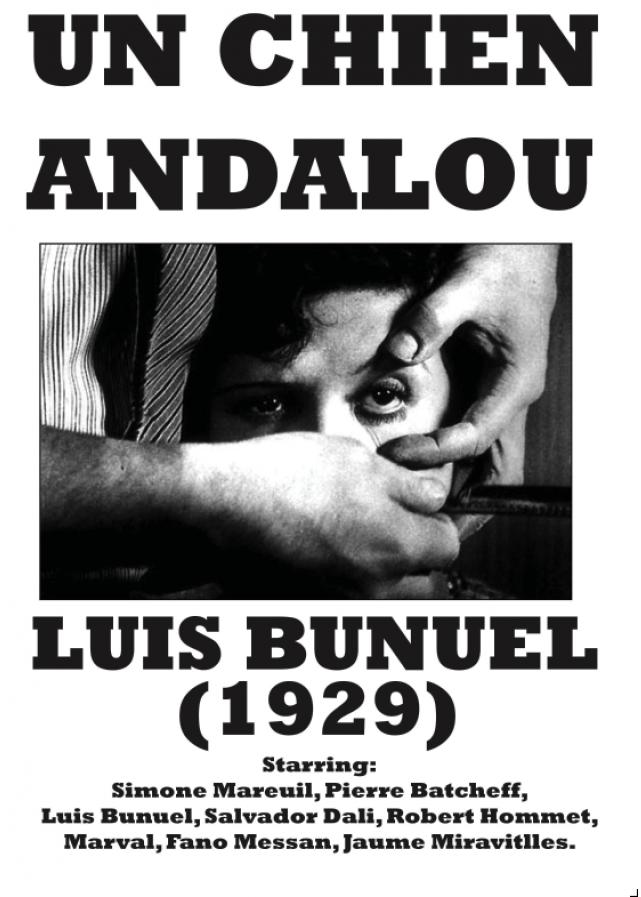 Trivia: At the Paris premiere, Luis Buñuel hid behind the screen with stones in his pockets for fear of being attacked by the confused audience. Nothing of the sort happened. In fact, the audience loved its mysterious and incomprehensible plot.

…….Boy, that sure was a series of images put to film, wasn’t it?

Honestly though, I hate to say it, but I wasn’t really all that impressed with this movie. Which is kind of a shame too both because I’m fond of surrealist films and because I’m a decent fan of a lot of the artwork of Salvador Dali. And I will definitely say this movie was surreal. But aside from a few neat visual images, like the eyeball cutting scene or the ants in a man’s palm, a lot of this movie felt just kinda… boringly surreal. The sort of stuff that’ll make you say ‘Huh, that sure was random’ and then immediately lose interest.

The problem is that even randomness requires some kind of sense of comedic/dramatic/poetic timing to it or a sufficiently surreal/weirdness to make it worth watching. And as mentioned, aside from a handful of scenes like the eye slice, I never felt anything in this movie that really elevated it above your average ‘lols so random’ youtube video. And honestly, even the infamous eye cutting scene lost a few points for me after I spotted halfway through that it was just a shaved dead cow head.

So yeah, not really all that impressed with this short film. Shame too because this movie was definitely one of my more anticipated ones for this decade. But as it is, it probably ended up being the most disappointing so far. It’s certainly not the worst thing ever and has more than a few worthwhile qualities, but I’m hardpressed to rate it over a C-

Okay, with that out of the way, onto the main feature! Hopefully this’ll be a lot better…

Main Feature: A Man with a Movie Camera

……Boy, that sure was a series of images put to film, wasn’t it? But fortunately, I actually mean that in a mostly positive way this time!

Honestly, this movie was genuinely a lot more fun than I was expecting it to be. If you’re not familiar with it, basically it’s ostensibly a documentary about a cameraman shooting footage, but in practice it’s effectively a playground for the film to try all sorts of crazy and fun camera tricks including, but not limited to, the stuff mentioned in the trivia section. And while I’m not normally the sort of person to enjoy this sort of plotless series of images/scenes/whatever, even I have to admit that this has a real sense of energy, inventiveness and, dare I say it, fun to it.

The movie switches between weird camera tricks and quick edits and interesting day-to-day stuff with a quick freneticness that keeps you from getting bored and it has a real sense of style and rhythm that I really can’t put my finger on 100% as to why I liked it so much, but I really really did.

Now, I will admit that I did start to tire and drift off a few times during the movie, since as mentioned, this is not really my kind of thing, but it still managed to keep my attention astoundingly well and certainly much better than Un Chien Andalou. So yeah, this wasn’t really something I’d have expected to find myself watching, but it ended up being a very pleasant surprise nonetheless. A great watch if you’re interested. A-