20. The Autopsy of Jane Doe 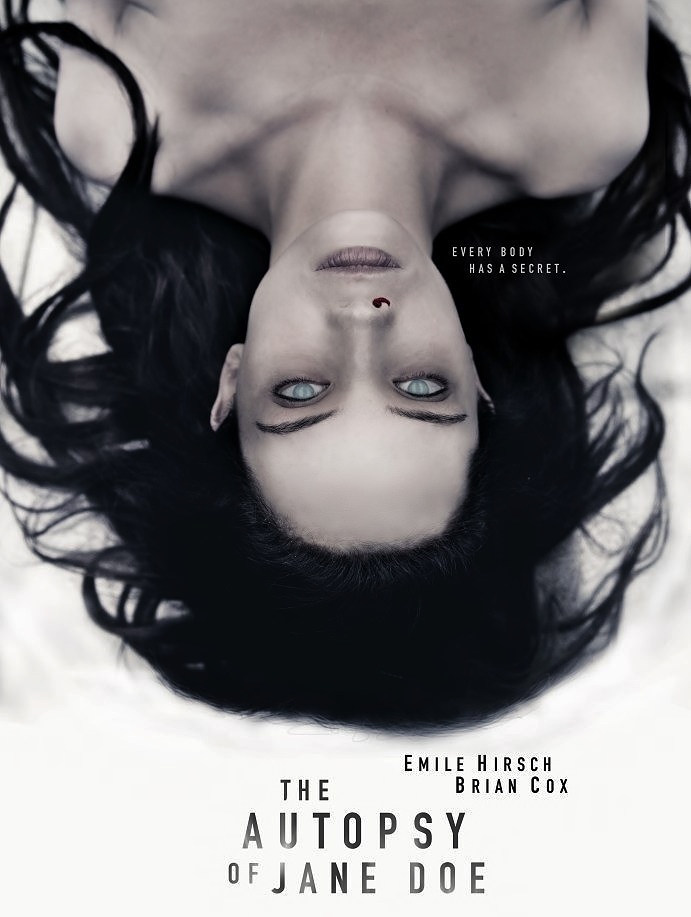 Said it before and I’ll say it again, boy was this a good year for horror. I’m the sort of person who only largely seeks out the really well received horror movies and there have been more than plenty this year already (several of which have still yet to appear on this list). The Autopsy of Jane Doe, however, stands out for being somewhat of an interesting take on a crime procedural horror movie. It follows two coroners as they perform the autopsy of a mysterious Jane Doe. It’s both fascinating and disturbing, the more they find out about the body and the more that things start to take a turn for the weird and supernatural. Honestly, when it turns to much more straight horror, I actually kinda missed the procedural element.

I also give it a lot of credit for being very self-contained. The vast majority of the movie is set in the autopsy building and helps create a good sense of claustrophobia and paranoia. Plus the two main actors, Brian Cox and Emile Hirsch work off each other very well. And of course, the actress playing the corpse, despite not moving for the entire movie, has a creepy-as-hell unblinking stare going on that really adds to the movie’s atmosphere.

Overall, this movie was a short but satisfying horror flick. Admittedly, the third act didn’t quite work as well as the first two, but it was still hella entertaining and kept my attention almost all the way through. Just like the movie as a whole did. It didn’t feel too long and occasionally meandering, like the Conjuring 2, and it never felt unintentionally hilarious like Ouija: Origin of Evil. It’s just a perfect mix.

19. Hunt for the Wilderpeople

You know, if you ask most people which superhero movie of 2017 they’re most interested in, you’ll probably get the usual answers of GOTG vol 2, Spiderman: Homecoming, Wonder Woman or possibly even Justice League (no no, I’m sure this Zack Snyder-directed DC movie will be good (the inevitable executive meddling will only add to the flavour)). For me though, it’s Thor Ragnarok and that’s almost entirely because of the director of this movie, Taika Wahiti.

I don’t know how quite to describe Wahiti’s style, except hilarious, odd and occasionally surprisingly touching. And that definitely applies to this movie about Ricky, a ‘gangsta kid’ and Hec, a grumpy wilderness man (I want to use the word ‘bushman’ but the movie kinda ruined that for me by having an actual bushman turn up). It has more than its fair share of the hilarious and odd, especially the crazy social worker who is clearly convinced she’s the protagonist in an action movie and is hilarious every moment he’s on screen. But even then, it has a surprisingly good heart. Aunt Bella was one of the genuinely nicest characters I’ve seen in a movie this year and watching Ricky and Hec’s awkward, abnormal relationship grow was very touching.

Really, it’s little wonder this is considered such an underrated little gem this year. It’s funny and heartwarming in just the right ways.

Kung Fu Panda is one of those franchises which really should not be as good as it is. Seriously, look at the tagline on that poster. That is some stupid-ass shit. Yet this series has somehow turned out not just one, not just two but three genuinely fantastic movies. I’d almost say it beats the third movie curse did I not believe this one to be a small step down from the last movie (albeit only a small one).

Honestly, between this franchise and HTTYD, most big studios out there (both live action and animated) could really learn a ton from Dreamworks about how to do an effective sequel. In both of the mentioned franchises, each movie feels like a genuine continuation of the story. Both the skills and lessons learnt in the earlier movies remain with the protagonist, yet they end up neither sidelined for another character’s arc nor rehashing the same character arc themselves. (Seriously, just think about how many sequels do one of those two things.) Instead they struggle with new dilemmas and find new ways to overcome and grow. And, rather than feeling like separate stories in the same universe, each movie feels like a continuation of this character’s personal journey. I struggle to think of many franchises period that can pull that off, yet Dreamworks have done it multiple times. Yeah, they’re definitely very hit and miss with their other projects, but they’ve definitely got something there.

Anyway, as for the movie itself, yeah it’s great. Great animation, great visuals, great score, great action, great almost everything. Certainly it doesn’t quite feel like it has the narrative weight that the second movie had, but it’s still a very fun ride. Honestly, I’m fairly amazed that it’s only barely in my Top 5 animated movies this year, but that speaks more to the amazing quality of animated films this year than any inherent weakness in this one.

You know, for any other studio, a movie about an obscure B/C list Comic Book character getting rave reviews and making over $650m WW would be a big fucking deal. But for Marvel? It’s just Tuesday.

Anyway, as for the movie itself, I think I speak for most people when I say HOLY SHIT THOSE VISUALS. Inception wished it was this creatively trippy. In interviews leading up to this movie, Kevin Feige often talked over and over again about how he wanted the movie to capture the fantastical images of the old comic books. And honestly, I just dismissed as that usual ‘We want to capture the spirit of the character’ drivel you often hear in comic book movie interviews. But in this case I can most certainly see what Feige was talking about and they most certainly succeeded in creating something visually spectacular. It’s one of the few movies I actually went out of my way to rewatch in IMAX, it was that good.

But, honestly, I do have a fair bit of praise for the story as well. A lot of people seem to dismiss it as a rehash of Tony Stark’s arc from the first Iron Man and, indeed, it does start that way, but it also takes Strange’s character in interesting and subtle directions. For example, while Tony’s arc is about overcoming his prideful playboy nature and become more compassionate, the movie has Strange actually embrace a part of his pride. A large part of the reason he saves the day is in fact due to his own arrogance leading him to not just blindly accept everything he was taught by the Ancient One/Mordo. He questions and he is shown to be right to do so, showing that while his arrogance does hurt him, in moderation it also does help quite a lot. Does that message come together smoothly in the film itself? Not quite. And I do think the movie could’ve handled this a lot better and made it significantly clearer, but it is interesting to see the common ‘arrogant guy learns compassion’ arc subverted like that.

Anyway, the movie has a great side cast, with Tilda Swinton in particular with a standout performance. Chiwetel Ejiofor is effortlessly charming in everything he’s in (and I appreciate the tidbits of backstory/depth we get for his characters). Mikkelsen’s character makes a brave attempt to escape the Marvel villain curse, but doesn’t quite make it. It’s a shame because his motives (to try and stop death) are genuinely interesting and he had all the pieces to be a really sympathetic character. I think the movie really needed to give him a ‘Zemo’ scene about his family to really fully flesh him out. His scene with Strange comes close, but ultimately focuses more on the philosophical side of his motives than the emotional side. But he’s still far from being Malekith bad. Mikkelsen imbues the character with a deadpan sort of charm that makes him at least somewhat fun to watch.

But really, what else can I say about this movie? It’s another good Marvel flick.

You know, when I was kid, I wasn’t scared of flying in the slightest? Now however? I think I’ve watched way too many movies like this…

Honestly though, I have to give this movie credit. I genuinely wasn’t expecting much from it. It just looked like another dull biopic aiming for the Oscars. But when I actually sat down and watched it, I was surprised how well it kept my attention, in large part because it did an excellent job of pacing itself.

See, I initially thought the film was going to spend maybe the first 10/20 minutes coving the ‘Miracle on the Hudson’ before spreading out to follow the fallout, kinda like Flight did. And, like that movie, I would probably end up really enjoying the first 10/20 minutes and feeling bored senseless at the rest. But instead, this movie it jumps between the incident and the post-flight examination so well and so naturally that the story of said Miracle feels like it very naturally takes up most of the movie. Plus the use of different points of view and perspectives  works in the movie’s favour when it comes to retelling certain moments by adding a fresh spin onto them. The movie paces itself perfectly, never feeling like it’s overstaying its welcome and giving time for the drama and character to settle naturally.

It’s not the sort of movie that necessarily excels at what it does, but what it does do, it does with such polished competence you can’t help but feel impressed. It’s high moments are very low key, but I think that really works for it and keep the movie grounded. Only major issue I’d give is the unfair villainization of the NTSB (who were actually on Sully’s side for the movie). I get the usefulness of establishing an antagonistic force in the movie to provide conflict and tension, but they may have gone a bit overboard here. Otherwise, it’s a really good film.