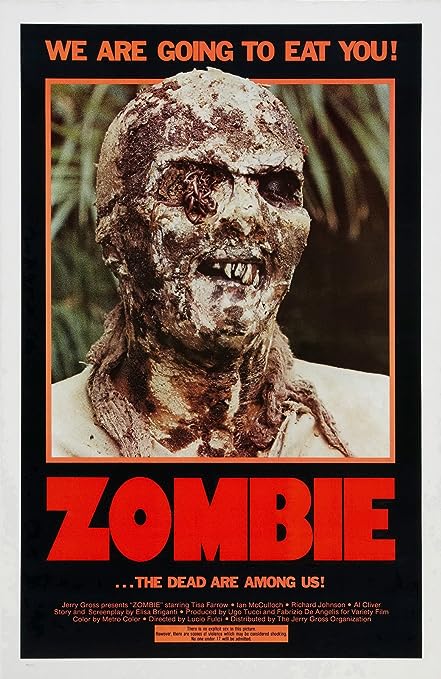 Premise:  A boat drifts ashore in New York City, belonging to a missing scientist and containing one angry zombie. A curious reporter teams up with the missing scientist’s daughter on a mission to find the truth and track the boat’s trail back to an island in the Caribbean, where the dead have been rising.

Ah Lucio Fulci. Godfather of Gore and King of Sharp Objects Getting Uncomfortably Close to People’s Eyes. You know, for as much as I’ve enjoyed some of his other previous works, like The Beyond, it always struck me as odd that I’d never actually seen his most famous film, Zombi 2 (the unofficial Italian sequel to Dawn of the Dead, which was Zombi 1 in Italy). So naturally, I was pretty excited when the Wheel of Chaos brought up this classic as its next choice.

However, it was also why I was kinda disappointed when I ended up finding this movie… well… fairly boring.

Now don’t get me wrong, the gore is great. Fantastic even. As is the make-up on the zombies which is enjoyably grotesque and decompose-y. It is pretty clearly practical effects, but it’s good practical effects and it looks great. Plus, there’s some pretty solid action to boot. I’m sure all of you have at least heard of the infamous zombie vs shark moment and, even if you haven’t, there’s an absolutely hand-biting moment fairly early on in the movie involving a large jagged door splinter and somebody’s eye. If you’ve seen the movie, you know what I’m talking about. And if you haven’t seen the movie, trust me when I say I can sum it up with the simple phrase of ‘AAAAAAAAAAAAHHHHHHHH!’

In fact, I’m actually going to go one step further and say that almost every moment of the film with the actual zombies in, is great fun and enjoyably gruesome and gory. The problem is that said zombie scenes only really feel like they take up maybe a third of the movie and… well… the rest of the movie is dull. Tediously dull. The main characters aren’t interesting, the dialogue is flat and even the few moments of emotional pathos they attempt to squeeze out just feel kinda bland and lifeless. You spent most of the time waiting for the zombies and the fantastic practical effects to pop back up and just get bored when they don’t.

Because, like I said, when the actual zombies and gore/make-up department get a chance to shine, the movie is great fun and up there with the best of Fulci’s work. But when said zombies are offscreen (which is far too often) there’s just nothing left to give a crap about.

In conclusion, honestly, while I’d like to give this movie a higher score, I ultimately can’t. The zombies look great and the gore effects are fantastic, but everything else is a flat uninteresting squib. And the flat uninteresting bits outnumber the cool zombie v shark bits two to one. So I’m giving this a solid mixed score.

Was is Scary?: EYES SHOULD NOT BE THAT SQUISHY.

Was it Silly?: NO SERIOUSLY, I CAN’T STOP THINKING ABOUT THE FUCKING EYE SCENE.