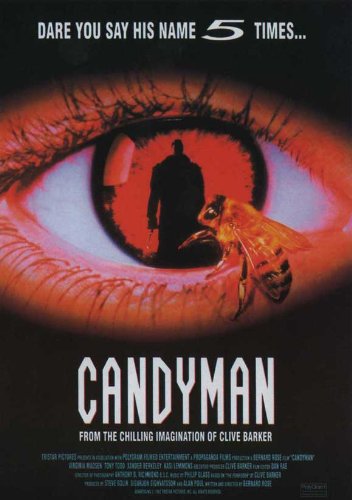 Premise:  Helen, a graduate student writing her thesis on urban legends, decides to try and research the Candyman (a hook-handed wraith who appears if you say his name five times in a bathroom mirror) and his relationship to a rundown, gang-infested housing estate.

What results is a murderous mindtrip of bees, hooks and murder as the real Candyman makes his appearance and systematically rips Helen’s life apart.

I’m not going to lie, this was a hell of a lot better than I thought it was going to be. I was going in expecting a fairly typical slasher movie, one based on that whole ‘Bloody Mary in the mirror’ thing. What I got was something significantly more thematically rich and complicated, with explorations of race, urban legends and the blurring of lines between a good ghost story and almost religious parable.

Well, okay, maybe I’m overplaying it a little bit, but I ended up really enjoying this movie. Everything from its characters. to its ideas, to its themes, to its settings, to its soundtrack, which resembles less a traditional creepy slasher theme and more an angelic church choir, fitting nicely with the themes of the movie. It all just worked for me.

In particular, I’ve got to make mention of Tony Todd as the titular Candyman. I’ll admit, I’m not amazingly fond of unmasked serial killers in horror movies and I’m fairly mixed on whether or not I think it works here, but one thing I can’t criticise is his voice. I don’t think it’s exaggeration to say that Tony Todd’s voice is like pure liquid honey being poured into your ears.I don’t know if they added modulators or whatever to it to give it that tone, but it’s the kind of sexy-ass voice that’s impossible not to love, regardless of sexual orientation. It really adds to the mythic god-like status the movie provides him and makes him sound something more than your regular slasher villain..

Not to say the main heroine isn’t worth her share of compliments either. Virginia Madsen’s Helen is our main focus for much of the movie and she knocks it out the park, going from curious investigator to barely deranged and unhinged as the results of the movie take more and more of a toll on her, right up until the final scene which, while I won’t spoil it here, is one hell of a doozy.

Honestly, there are so many great scenes that stuck with me in this film. The toilet scene, the parking garage introduction of the Candyman, the ‘crunchy’ kiss (you know the one), more scenes than even a lot of the better serial killer movies tend to provide. Combined with its genuinely interesting and philosophical look at the idea of urban legends and this was really a movie that delivered a lot more than I was expecting.

Was is Scary?: More in terms of creating a strong atmosphere of dread, than open actual scares.

Was it Silly?: Tony Todd may have the voice of a sexy god, but his face isn’t exactly the scariest.