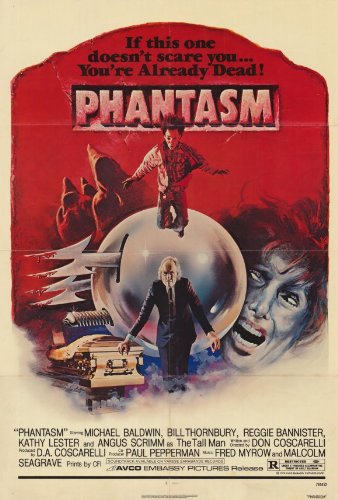 Premise: Huh… Okay, a little unsure how to go about this without sounding like a complete lunatic. Um… a pair of brothers discover that something strange is going on around their local graveyard, centered around the mysterious and sinister Tall Man.

As their investigation grows deeper, more and more mysteries begin to be uncovered, such as the hooded dwarfs, the weird floating silver blade spheres, the portal to Mars- See, this is why I said this was hard to describe!

Man, I am hitting 3 for 3 tonight on ‘Movies I liked but don’t really have all that much to say about’. That said, if the Blob was the most 50’s feeling movie on my list tonight, then this is definitely the most 80’s feeling. Everything from the setting, to the cinematography, to the ideas, to the atmosphere, to the goddamn haircuts just screams 80’s to me. Which is weird because it technically came out in 1979. But whatever, t’s close enough.

Like I said though, there is quite a bit of stuff I liked about this movie. The relationship between the two brothers was touching, the Tall Man was sufficiently creepy, some of the ideas and visuals were neat. I do think it suffered a bit from attempting to be a more sci-fi-ish movie and providing at least some level of explanation for some of the events, rather than it just being a bunch of creepy shit. I’m mainly thinking of the portal to Mars in this, but other stuff as well. Also the big twist ending was something I’m very much mixed on, feeling a little bit like a cop-out. So I’d probably rank it below Alligator and Tenebre, but I still wouldn’t call it a bad movie.

Still, if you’re interested, I would recommend giving it a look. There’s a lot of interesting ideas and fun stuff in there and you can tell that Angus Scrimm is having a ball playing the Tall Man. It just wasn’t really something that really stuck with me as much as others.

Was is Scary?: The Tall man was fairly creepy at times.

Was it Silly?: Did I mention this was a very 80’s movie? The mullets alone feel like they should qualify for this.