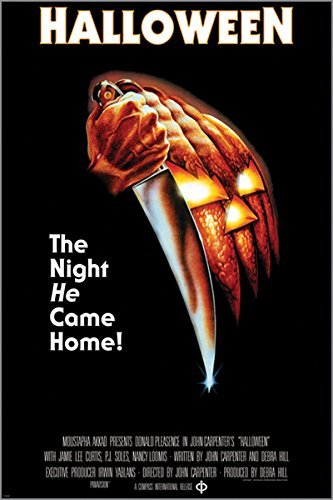 Okay, kinda cheating a little bit here, because I’ve actually already seen this movie. But I wanted to rewatch it again anyway in preparation for the second film I’m covering today, and, since I have a limited amount of movie watching time, I figured I might as well count it on the tally. After all, as much as I loved it the first time I saw this movie, it’s been a long long time since I last watched it and this wouldn’t be the first time my opinion on something changed upon a rewatch. So rather than a ‘What do I think of it?’ sort of review, this is more of a ‘Did it hold up?’ sort of review.

Spoiler alert? It fucking held up.

One of the things that really struck me upon rewatch of this movie was that, in spite of this film’s reputation of codifying the slasher genre and said genre’s propensity for fairly… ‘dramatic’ kills, the actual deaths in this movie are fairly tame. I think Bob’s is probably the most memorable, what with him being suspended from a door by a common knife, but even then it’s fairly basic compared to the ‘killed by opening garage door/eaten by bed/having head frozen by liquid nitrogen and smashed’ sorts of hijinks that fellow slasher movies normally get up to. Yet, weirdly enough, that’s kind of one of the things that really works about this movie and even to this day sets it apart from its successors.

There are plenty of great examples I can point to. Annie’s death in particular, going by modern horror movie rules, you’d think would happen a lot earlier than it actually does. But no, minutes and minutes go by, with dozens of potential moments for Michael to pop out at, leaving the audience in constant tension. Because we know he’s out there. We actively see him hovering in the background more than once, hovering ghoulishly in the darkness. In many ways, the blank look of that Shatner mask really works to compliment his character because we never have any idea what he’s thinking at any time or when he’s going to strike. And when he does strike, it’s short, brutal and effective.

Hell, more than once, he doesn’t even need to rely on jumpscares. He just walks towards the unexpecting victim in full view of the camera and the audience and it’s absolutely terrifying. He does it as the bedsheet ghost and he does it in the infamous scene where he wakes up from his first seeming death. And it works so much better than your typical average jump scare. Especially the eerily silent way in which he moves.

Honestly, I could go on and on about how much I love this movie. From its characters, Jamie Lee Curtis’s effortless likeability, the nervous charisma and dread of Donald Pleasant’s Dr Loomis to John Carpenter’s excellent direction and cinematography to just… that goddamn theme. Like the Jaws theme, it’s so simple, yet so effective and memorable, like a pumping heartbeat or alarm.

Needless to say though, it held up. Both as one of the granddaddies of the slasher genre (along with the criminally underrated Black Christmas) and one of my favourite horror movies of all time. If you haven’t seen it already, do yourself a favour and watch it.

Was is Scary?: It’s goddamn Halloween! Of course it’s scary!

Was it Silly?: Less than most slashers.