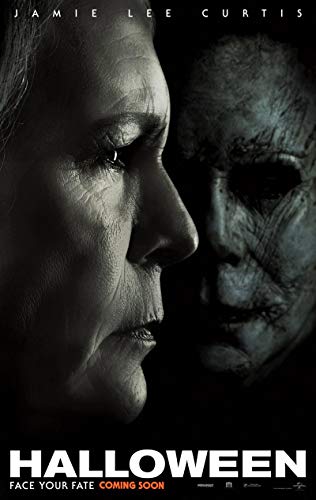 You know, it’s rare for me to really go out and watch horror movies while they’re in the cinema. Partly because I’m kind of a massive coward, partly because I prefer being able to watch them in a controlled environment, but also partly because I really hate jumpscares on big loud cinema screens and a lot of modern horror movies tend to rely on jumpscares pretty heavily. But every so often comes along a horror movie that gets so much hype, has such good trailer and marketing and personal interest that I decide to just bite the bullet and check out in theatres. And this movie has been getting a lot of hype.

Which I’m actually okay with. Because it was actually pretty fun.

Now, to get it out of the way first, this is not as good as the original Halloween. Obviously. And I can’t tell you if it’s as good as Halloween 2, because I never bothered to watch the Halloween sequels for various reasons. But, like I said, I had a lot of fun watching it. It simultaneously works as both an homage to the original film, while exploring its own ideas, some of which I felt worked, some of which… less so (like the psychiatrist subplot).

I will single out Jamie Lee Curtis here though as one of the real stars of the movie. When they first announced they were bringing her back, I mainly just dismissed it as a marketing ploy (like Arnie returning for Terminator Genysis) but she really does a top notch job aging the character and turning her simultaneously into something new while also retaining a few glimmers of her old character deep beneath the surface. I heard someone compare it to Harrison Ford’s aging of Han Solo in TFA and yeah, I can really see that. I also appreciate that they don’t fully shy away from the fact that she was kind of a shitty mom to her daughter growing up and that she clearly is just as badly damaged as Michael in some ways.

Also their confrontation towards the end was just excellent, especially the numerous role reversed callbacks from the original movie. I can (and have) easily see some people complaining that they’re cheesy or too blatant (which I could arguably understand as a criticism, yeah,) but they really worked for me both as a cool easter egg and in pushing the ‘blurred lines between predator and prey’ theme that the movie had in regards to Michael and Laurie. Plus there was one which just had me pumping my fist in a ‘Hell yeah’ kind of moment.

Another thing I will credit the movie for was its ability to shy away from the over-the-top kills of the slasher genre and mainly stick to what made the first movie work so well, the build-up. Admittedly, the body count is a lot higher in this movie than in the original Halloween and there are a few over-the-top kills here and there, but many of the best sequences in the movie aren’t about super gruesome murders, but are instead about the build-up towards said murders. In particular, there’s one tracking shot focused on Michael of all people that was a real standout of the movie. I don’t want to spoil it here, but in many ways it was the fact that the camera stayed on Michael almost throughout that made it so effective.

One thing I will criticise the movie for, though, is that the pacing could use work. It does feel like it takes a bit too long to really get going, especially in regards to Michael’s escape. And while Michael’s rampage through the suburbs in the second act was fun, it doesn’t really feel like the movie transitions well from said second act to the final act in Laurie’s house. Especially since said transition heavily relies on the psychiatrist character/subplot which, as mentioned, I really wasn’t that fond of. Also, Judy Greer was criminally underutilised in the last two acts (as usual in mainstream blockbusters). She gets one cool moment at the very end, but I feel like much more could’ve been done with her.

Still, it was a good movie and I enjoyed it a lot. It’s definitely a step above most horror sequels and I’m glad it’s making the kind of money it is making. And yeah, if you’re interested in it and like the original Halloween, you might as well give it a look.

Was it Silly?: A bit more than the original.