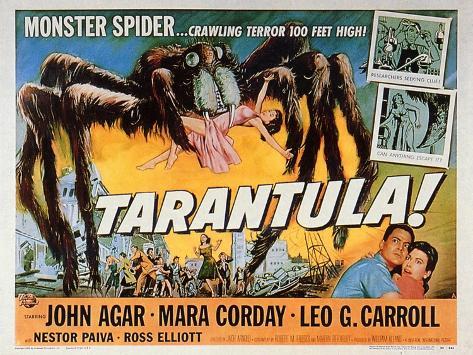 Premise:  The mysterious death of a severely deformed scientist draws the attention of a small-time Arizona doctor. Curious about the strange death, the doctor decides to investigate the scientist’s former colleague Dr Gerald Deemer, a man working in secret on what he believes to be a formula that will revolutionise science as we know it.

Also, a giant tarantula decides to fuck shit up.

Huh. So that’s two movies in a row now that are basically ‘WHAT HATH SCIENCE WROUUUUGHT!!!’ horror movies. This one isn’t quite as good as Re-Animator though.

Basically, remember when I covered The Blob a week or two ago and said it had more in common with those 50’s sci-fi movies than most modern horror movies? Well, this is exactly the sort of 50’s sci-fi movie I was referring to. A scientist is out in the desert doing misguided science, there’s an easily solvable mystery about what kind of science he’s doing and it all leads to a big disaster at the end, in this case involving a giant tarantula. Pretty standard stuff.

That said, while I enjoyed this movie more than I did The Blob, it’s still a bit ‘eh’. There’s not really much in the way of heavy tarantula action until the climax and the ‘mystery’ about the professor’s experiments is both significantly less interesting and incredibly easy to work out almost instantly (spoiler alert, the shot of him examining giant animals suggests that he’s creating giant animals). Still, there’s some neat build-up to the tarantula attack and the effects for the titular tarantula range from ‘actually fairly good’ to ‘clearly pasted onto a screen, but not too awfully’. Heck, there’s actually a pretty good shot of it peering in through a window during said climax.

Was is Scary?: I guess if you’re terrified of tarantulas maybe?

Was it Silly?: I guess if you’re not terrified of tarantulas clearly pasted onto the screen via 50’s effects ‘magic’, maybe?