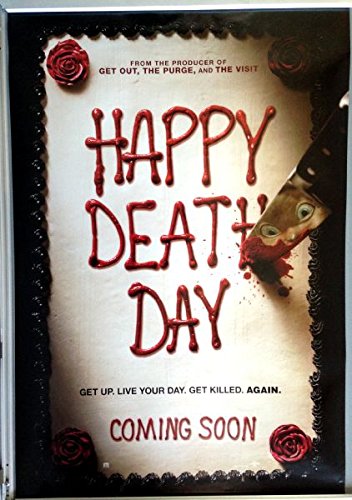 Premise:  A bitchy college student is murdered by a masked killer on her way to a party one night. However, rather than simply die, she ends up reliving the previous day in a timeloop over and over, in an attempt to find out who keeps killing her.

Pretty recent movie this time. And it’s not about science going wrong! Huzzah!

Seriously though, this is a movie I actually really wanted to see last year, but never really quite got around to. It had good reviews and an interesting premise, but I ended up prioritizing watching other movies first for my end-of-year list and it barely missed out. Shame too, because it’s honestly a pretty fun flick.

The first movie that comes to mind when I watched this was The Final Girls, which similarly worked as a fun send-up of slasher horror movies. And I’d honestly say I enjoyed this movie as much as I did that one. Like I said, it has a fun premise, which allows for a lot of fun moments and has a good main character who we clearly see grow throughout the movie. It’s a slight, but perfectly enjoyable horror movie.

That said, if I had to pick apart anything about this movie it’s that, while it’s fun and enjoyable and a perfectly good horror, it never really has anything that takes it that final step from ‘a good horror movie’ to ‘a great horror movie’. And maybe that’s a little unfair as a criticism. After all, the characters, the setting, the kills, the story, the writing, they’re all good. But I’m not exactly going to be thinking about them weeks from now, compared to something like Eraserhead or Candyman or Alice, just to pick a few from earlier this month. In that regard, it really is a lot like The Final Girls, which I enjoyed a lot while watching, but promptly forgot about it not long after.

If I had to pick any reason it never really made that final step, I’d narrow it down to the handling of the timeloop premise. It’s not done at all badly, just to be clear, on the contrary I’d say it’s written perfectly ‘good’. But I can’t help but feel the movie could’ve gotten even more interesting things out of mixing it with the horror genre. Something really gory and shocky and terrifying. Admittedly, the PG-13 rating certainly didn’t help in this regard, which is probably another reason it never quite rises above ‘good’, but I digress.

Still, even if it’s not likely to amazingly stick with me, this is still a good film and the sort of movie that I’m pretty likely to think fondly of looking back. I was never bored, I followed along easily enough and there were some inventive moments and ideas here and there. And even if it never quite ascends to greatness, sometimes good is still good.

Was is Scary?: I feel like it could’ve been moreso, if the PG-13 rating hadn’t held it back.

Was it Silly?: In appropriate ways.