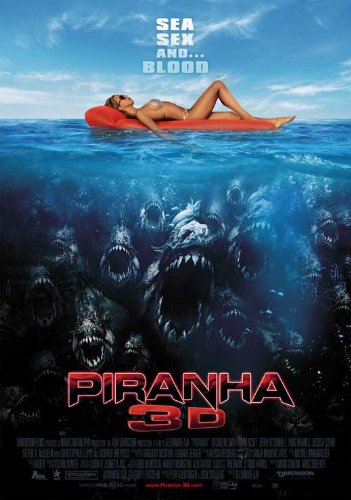 Premise:  An earthquake causes a underground chasm to open up, containing thousands of angry, bloodthirsty prehistoric piranhas. Also a large number of scantily clad teens are throwing an enormous party not far away.

What the fuck do you think is going to happen?

I can’t hate Piranha 3D. I really can’t. It’s a movie that promises three things; gore, tits and cheese, and it delivers all three in spades. It’s almost pure, in a squicky gratuitous immature sort of way. It delivers all three of its promises with reckless abandon and some actual kinda competence and talent behind the camera. Plus, it actually has some genuine pretty horrific and disturbing moments in it, which I really wasn’t expecting from a cheesy Piranha B-movie.

I recall hearing somebody talking about this movie as ‘the sort of thing Snakes on a Plane should’ve been’ and yeah, I really can’t disagree with that. This is a movie that knows its audience and is more than happy to cater to them as often as possible. It never gets overly bogged down in the uninteresting human cast, never leaves too long between the big setpieces and doesn’t bother to spend hours and hours keeping the monsters in the dark or shadows in an attempt to ‘build up tension’. (That last one in particular is why I appreciate Kong Skull Island so much for just saying ‘Fuck it, let’s show off Kong in the first 5 minutes and just have him wreck shit from the off.)

Still, nobody comes to these movies for the human protagonists to begin with, they come for the Piranha attacks. And in this regard, this movie definitely delivers. The piranha attacks in this movie come heavy, come often and are showing in incredibly gory detail. Possibly too gory at some points (which just makes me feel old to say). You see people’s flesh and skulls being picked apart in pretty gruesome detail, which admittedly turned my stomach at a few points. There’s a solid mix of practical effects and obvious CG and I’d never say that the Piranha’s look all that real, but it does the job. And there are some cool gory set pieces here and there.

So yeah. This movie is basically just what it sets out to be and honestly does a fairly good job. The only question is just how much gore, tits and cheese you’re willing to swallow. And, needless to say, I can swallow a lot.

Was is Scary?: More disturbing than I expected it to be.

Was it Silly?: See aforementioned points about ‘gore, tits and cheese.’