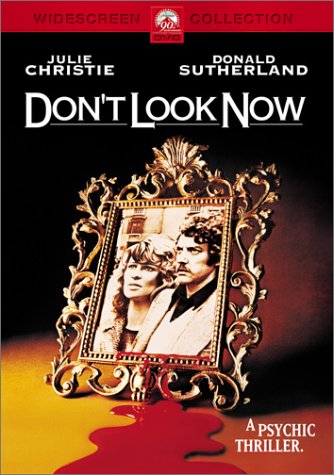 Premise:  After the tragic death of their daughter, John and Laura Baxter attempt to rebuild their lives and their relationship in Venice. However, when Laura runs into a blind woman who sees the dead and claims their daughter is attempting to warn John from a great danger, strange things start to happen…

Fun Fact: This movie was actually Entry No 1 when I created my horror list for this month. As in the first movie that came to mind when I was thinking of famous horror movies that I’d not seen before that I wanted to see. So needless to say, I had pretty high expectations for it. And did it live up to those expectations?

Well… it may not be Eraserhead good, but it’s still a pretty dang interesting watch..

A lot of what really works about this movie are the visuals. Not like the usual thing you think of when you hear ‘visuals’, like practical effects or CG or that sort of thing, but stuff like the cinematography and the set design instantly helps created this strange mood and tone for the movie that really helps sustain it throughout. Most of the movie is set in Venice and the city’s high buildings and narrow streets manages to create almost a sense of low-key claustrophobia and mystery, like the city itself is some kind of eerie giant urban maze that our characters are lost in. Often time, you don’t know what’s supposed to be paranormal and what’s supposed to be normal (which, to avoid spoilers, really compliments certain plot twists in the movie a lot).

I’ll also compliment the movie on setting a strong tone and sense of grief very early on, which drove a lot of the mood and atmosphere of the film. Seeing these characters attempting to move on after a genuinely tragic event, really adds a lot to their motivations and personalities, while also adding that particular ‘something’ to the horror proceedings yet to come. I’m not entirely sure how to describe it, but it reminded me a lot of what they did in The Changeling, one of my favourite horror movies of all time and needless to say they worked it in well here.

If I had to pick any reason though that I came out a little bit underwhelmed, it would be that, in spite of a strong beginning and very strong ending, it really feels like it needed a few more bigger moments in the middle of the film to fill the gap. The occasional spotting of a figure in a red coat and Donald Sutherland dangling from a platform are all well and good, but the second act felt like it could’ve used something a bit… more, if that makes sense.

Still, this really was a good film. I’ll admit I initially came away from it feeling slightly underwhelmed, in large part down to the sky-high expectations I had for the film, but having had time to think of it, I honestly really did enjoy it and it certainly kept my attention for a lot of its bigger scenes. Especially that ending which, in spite of having known how it ended beforehand I’m afraid, still really impressed me. It was kind of like the ending to the Usual Suspects for me where, even thought I knew what was coming, the excellent editing and combined with the use of foreshadowing that even I hadn’t properly noticed, still made it gripping and affecting to watch.

Was is Scary?: More tense and gripping than outright terrifying. Although that final scene…

Was it Silly?: Donald Sutherland’s acting in the opening scene was a little much.