Day 30: Eyes Without a Face 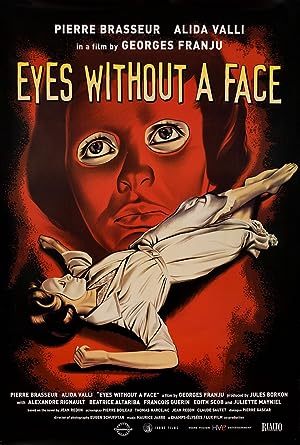 Premise:  A genius scientist whose daughter has been disfigured in an accident, decides that the most reasonable course of option to help his daughter is to kidnap pretty women, surgically remove their faces and reattach them to his daughter.

Things go about as badly as you’d expect.

Man, the daughter’s mask really is creepy as shit, isn’t it? You really wouldn’t think it would be so bad, being a fairly basic sort of theatre mask, but put it in motion and it suddenly becomes really goddamn unsettling. All without needing to try all that hard to be scary. Or maybe it’s just the expressive, almost bulging eyes staring out from behind said mask that is so uncanny about the whole thing. Either way, it’s freaky as shit.

Anyway, I actually enjoyed this a lot more than I thought I would. Reading the premise going in, I just assumed it was going to be a fairly typical ‘immoral scientist doing immoral experiments’ sort of story, which I was kinda getting a bit sick of. And yeah it kinda was exactly what I thought, but, once again, I got reminded that it’s not about the story itself, but how well you tell it that truly matters when making a movie good and this film tells its story excellently.

First of all, the make-up and visual effects are outstanding. Honestly, there’s not a single effect in the movie that doesn’t hold up almost perfectly to modern standards and there’s shit like a face being surgically peeled off a woman’s body. Plus Christine’s disfigurement, which I genuinely didn’t think they were actually to bother to show, but ultimately ended up looking really damn good (or… well… not good, since that’s kinda the point, but… well, y’know.)

The story itself is simple, but again well-told, with good pacing, strong characters and excellent use of its black-and-white format to really create a strong Frankenstein-esque atmosphere. In fact, Frankenstein (the film, not the scientist or the monster) is actually probably a fairly good comparison for this, albeit with a tragic heroine instead of a tragic monster.

If I had to give any kind of criticism, it’’s that the film does end a bit abruptly, but it’s still an excellent piece of work. And may or may not also secretly be a prequel to Face/Off. At least in my headcanon, at least.

Was is Scary?: That mask is still creepy as shit