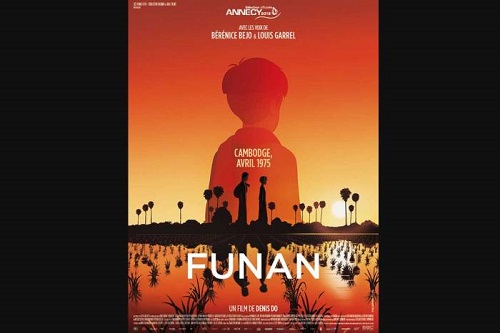 Funan… Boy, Funan is a really difficult movie for me to talk about. Really. This isn’t the first animated movie I’ve watched that covers a horrific real-life atrocity or difficult and tragic time in history (in this case the Cambodian Genocide). Hell, I watched two last year with In This Corner of the World and The Breadwinner. Then you’ve got the obvious classics like Grave of the Fireflies and Persepolis and so on. But Funan… Funan…

Funan was not a movie I enjoyed sitting through. Not down to any flaw in its storytelling or animation or anything else, but because it’s thoroughly tragic and depressing and relentless in its constant atmosphere of oppression and pain. I didn’t enjoy watching it and I likely won’t watch it again, but I still have to acknowledge it.

Because Funan is an important film to see. It hurts and hurts and has little in the way of happy moments or even hope, but it’s still important to see. Because this stuff really happened to real-life people.

The movie itself is set during the Khmer Rouge rule of Cambodia and portrays many of the atrocities done against the Cambodian people. Caught in the mix of all this is a family, who are separated from their three year old son in the chaos of the evacuations. Forced to work in camps, they struggle and work to survive in the hopes of one day being reunited, even as they experience more and more tragedy, atrocities and death.

Now, on its own, this premise isn’t really something I’ve not seen before. Last year’s The Breadwinner had a similar ‘parent and child separated’ plot to it, after all. But what made this so much more relentlessly crushing and bleak than that movie? Well, I kinda already said it in that last sentence. It’s relentless. Films like The Breadwinner, In this Corner of the World and even Grave of the Fireflies had the occasional moment of lightness or family or just plain hope. Funan has none of that. From the moment the family are in the hands of the Khmer Rouge (which happens very quickly in), it’s nothing but relentless pain after pain after pain. You can see the various tragedies coming, but that doesn’t stop the movie from plowing into them anyway, before going on straight into the next one.

Another part of the reason this film feels so much more relentlessly grim than its compatriots is the relative lack of agency of its protagonists. Not that I’m saying they’re flat or uninteresting, because trust me they’re not, but because we see that agency completely stripped away from them by the Khmer Rouge and there’s nothing they can do about it. Even in the oppressive and tragic environments like The Breadwinner or Grave of the Fireflies, the protagonists still have some agency to secretly rebel or make their own decisions respectively. In Funan, attempts to secretly rebel in even the smallest ways either get caught out immediately or end up being ultimately futile in the end.

Honestly, if I actually had to pick any media property to compare Funan to, it would probably be Art Spiegelman’s iconic graphic novel about the Holocaust, Maus. The scenes taking place during the holocaust, where atrocity after atrocity after atrocity is piled upon the prisoners and the main character can do nothing but try his absolute best to survive against horrendous odds… Yeah, Funan reminds me a lot of that. But even then, I still feel like I enjoyed reading Maus a lot more than I enjoyed sitting through this movie.

Honestly, it’s part of the reason I’m so conflicted about this movie. Because, for all its masterful portrayal of the oppression and atrocities of the Khmer Rough, part of me feels like Funan was almost too relentless. Too bleak and too hopeless with characters unwilling and incapable of fighting back. But then another part of me points out that that was likely an accurate representation of what really happened during that period. Over a million people died in those conditions, in those camps, unable to meaningfully fight back or save their families. Can I really penalise the movie for accurately representing this atrocity just because it made me too uncomfortable? When that was precisely what it was setting out to do in the first place?

It’s a difficult question. And honestly, one I’m not sure I have the answer to.

Ultimately, all I can say in the end is that Funan is a very difficult watch. I don’t blame anyone for not being able to make it through it or who finds it too relentlessly bleak to really feel all that attached to. Because I get it. It’s not a movie I enjoyed watching. But it’s still an important film. That much I can say for sure.