Best Picture: Mutiny on the Bounty

You know, I don’t usually like to start these yearly summaries off on a downer note, but I’ll make an exception here. After all, this year led to the beginning of years of strife and torment, the likes of which the world had never seen before and likely never will again. Families were torn apart, friendships broken, horrors were released, many of which still haunt us to this day…

What? Nazis? No, I was referring to the invention of Monopoly.

Seriously though, the Nazis did a fair amount of shitty stuff this year, beginning their re-armament program and reinstalling the Luftwaffe, in violation of several post-war treaties. Which, of course, would have significant consequences down the line. On a more positive note, however, some interesting stuff made their first appearance this year, including briefs underwear, canned beer, Porky Pig and prontosil, the world’s first broadly effective antibiotic.

If you want a nice big tearjerker though, this was also the year that Hachiko the dog died. You might have heard the story told in one way or another, but Hachiko was a japanese dog who waited every single day in the exact same spot for nearly 9 years awaiting the return of his owner (who sadly died at work), eventually dying himself on the same spot. So yeah. Enjoy crying about that for a week.

As for famous births, we’ve got Elvis Presley, Donald Sutherland, the Dalai Lama, Robert Downey Sr (father of Robert Downey Jr), Julie Andrews, Isao Takahata and Woody Allen. I feel like there’s an inappropriate joke I could make about that last name, but I’m still too depressed about that damn dog…

But, with all that out of the way, onto the pre-show.

Not going to lie, this short feels like a Looney Tunes cartoon before Looney Tunes were even properly a thing.

Seriously, I’ve seen a handful of old Mickey Mouse cartoons before this, but most of them were either that slightly comic horror, akin to Swing you Sinners or just fairly basic stories told with a few comedic sequences, like Betty Boop as Cinderella. This one, on the other hand, is arguable the first cartoon short I’ve covered in this series, that feels mainly dedicated to comedic slapstick, rather than any proper story. Oh sure, there is some story, revolving around a band concert that Donald Duck seems determined to crash but, like Looney Tunes, it’s a paper thin plot that acts more as a framing device for the comedic antics.

But you know what? It’s a pretty damn good Looney Tunes cartoon. It’s funny, quick, does a good job of establishing the simple characters and motivations and does a good job getting humour out of them, before building to a magnificently over-the-top conclusion. It’s easy to suspect that many major animated shorts might’ve taken inspiration from it. However, with that said, and maybe it’s just the fact that I’ve seen a lot of Looney Tunes cartoons before, but this didn’t really quite have the same ‘uniqueness’ to it that a lot of the other shorts I’ve watched thus far had. But I’ll still give it a strong B+. 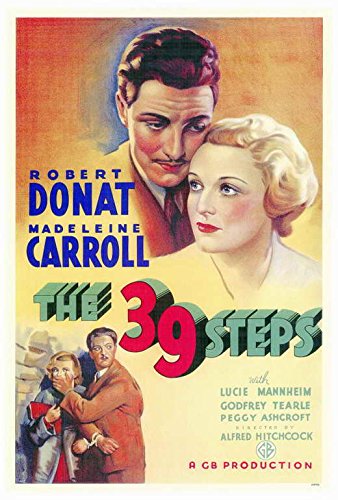 Plot:  After meeting and befriending a hunted spy following an assassination attempt at a music show, British everyman Richard Hannay soon finds himself framed for her murder. Avoiding assassins, attackers and a nationwide manhunt, Richard must find the true culprit of the murders to clear his name, while attempting to figure out what the mysterious ’39 steps’ that the dying spy mentioned are. On the plus side, he doesn’t end up getting chased by a crop-duster, so at least he’s got that going for him.

Trivia: Before filming the scene where Hannay (Robert Donat) and Pamela (Madeleine Carroll) run through the countryside, Alfred Hitchcock handcuffed them together and pretended for several hours to have lost the key in order to put them in the right frame of mind for such a situation. Which, y’know, you sounds like a pretty Alfred Hitchcock thing to do.

Yup. This certainly was a solid Hitchcock film, yessiree.

Honestly, I think that really does sum up this film perfectly. You know what you’re going to get with a Alfred Hitchcock thriller. Good tension, good acting, good writing and the almost unnaturally competent level of direction that you almost always get from the Master of Suspense. And the 39 Steps is a perfectly solid Hitchcock film. It’s not one of his best, it’s not one of his worst, but his stamp is all over it and it’s every bit as competent as you might imagine.

That said, I’m still kinda hard-pressed to rate it too highly. I’ve seen so many Hitchcock films over the years, all of which I’ve liked to some degree, that I’m hard-pressed to really rate this one all that high when it’s really just average for him. For any other director, it would be a revelation, sure, but it’s barely noticeable in the ocean of great films that is Hitchcock’s filmography. So I’m just going to give it the ‘okay for Hitchcock’ score. Which is still a pretty strong B+/B, but we all know he can do better.