Getting away from Germany for once, this year saw the death of King George V in January, leading to his son Edward VIII taking the throne… only to abdicate in December to marry an American woman (and also because he might’ve been a Nazi sympathiser), handing the throne to his brother Prince Albert, who became King George VI who, I have been reliably informed, was not in fact secretly played by Colin Firth.

In other news, the Hoover Dam was completed, Roosevelt won a second term, Jesse Owens fucked over Hitler’s ideas of Aryan Supremacy at the 1936 Berlin Olympics, Gone with the Wind was published (the book version, but still bleh), Alan Turing published his first paper introducing the concept of the Turing machine (a precursor to modern computers), and, in old-timey superhero news, both the Green Hornet radio show and The Phantom (the one with the comically terrible purple costume) first made their appearances. Also, a bunch of reporters had a race to see who could make it around the world fastest flying only commercial airlines. (H.R. Ekins from the New York World- Telegram won with a time of 18 1/2 days). Because apparently, in those days, when one had a slow news week, they took it as an excuse to do challenges from old Top Gear episodes.

Sorry but, that song has been fucking stuck in my head for ages now. Alas, unfortunately, the rest of the cartoon didn’t quite live up to that same level of catchiness.

Now, I will admit, a large part of why I picked this for my pre-show this time around was because of how much I loved the last Popeye cartoon I covered here. And I would like to reemphasise that love, because that short was fucking amazing. This, on the other hand, not so much. Honestly, catchy song aside, it was kind of a slog if I’m honest. Where Blow me Down was nothing but non-stop energy and insanity from start to finish, this was more drawn out and toned down and dare I say boring at times. Even the addition of colour I felt worked against it, giving it a weak faded look that didn’t compare to the sharper black and white contrasts of the other short. The violence was toned down, Olive Oyl was more of a traditional damsel, the weird overdubbing was less hilarious and I’ve no idea what the fuck Wimpy was doing for most of the short, aside from chasing a duck with a meat grinder.

Not to say it’s completely without its charms, mind, because that song is incredibly fucking catchy, but overall, this was a significant downgrade from the last Popeye short for me. C 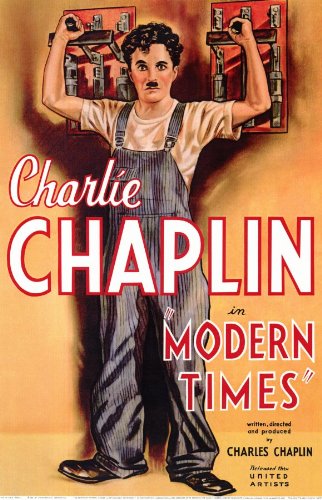 Plot:  That one where Charlie Chaplin works in a factory.

Trivia: Discounting later parodies and novelty films, this was the last major American film to make use of silent film conventions, such as title cards for dialogue. The very last dialogue title card of this film (and thus, it can be said, the entire silent era) belongs to The Tramp, who says “Buck up – never say die! We’ll get along.”

Boy, I finally get to talk about Charlie Chaplin on this list! One of the truly great silent comedians, whose slapstick transcends generations, whose films were so magnificent and who inspired so much more to come!

Honestly, I think bad timing plays as much a role as anything. Considering we’re in an era where companies are expecting people to work more and more hours for less and less pay and coming up with ‘innovations’ to suck every last bit of unnecessary profit into their own hands, this movie ends up feeling absurdly timely for its political message which, unfortunately, kind of affects how we see the comedy. An audience member in the 1930’s might watch Chaplin having a mental breakdown from overwork and going on a comedic rampage in his factory and think it’s hilarious. I’m watching it, however, and thinking ‘Too real! Too real!’ People in the 1930’s might think a machine designed to forcefeed workers so there would be no need for lunchbreaks was wacky. I’m sitting there thinking ‘I could genuinely see modern companies trying to introduce that’. It’s really quite jarring.

But Ruk, I hear you cry. Surely this movie’s ability to be depressingly prescient should be considered as a positive? Well, yes… and no. See, the problem is that this movie isn’t a political drama, but a comedy. And comedies are structured and designed in a certain way to try and get the most laughs out of the audience. But if an audience isn’t laughing, due to ‘too real’-ness in my case, then that structure somewhat works against it and makes it come off as a bit dull. Hence why I can’t quite say I enjoyed it too much.

At the end of the day, I’m genuinely of two minds as to how to mark it. On the hand, I can’t really say I enjoyed it that much. On the other hand, it feels wrong to mark it down for being too prescient and too cutting to modern day society. It’s an important film, just not one that I could enjoy for its primary purpose of comedy. So I’m going to give it two separate marks. C for enjoyment and A for objective quality (and I guess a B+ altogether). Here’s hoping the next movie will be easier to mark.

(Also, it’s weird that this has only just occurred to me but between this and Great Dictator (and arguably a bunch of other films in his repetoire), Charlie Chaplin was strikingly good at political messaging, wasn’t he? So all of you complaining about modern day media ‘inserting politics into things’, take note that fucking Charlie Chaplin was doing it in the goddamn 30’s.)