So apparently this was a surprisingly good year for literature. Not only was it the year Of Mice and Men and To Have and Have Not were finally published, but it was also the year that the first ever issue of Detective Comics was released, the ever famous home of Batman. Admittedly, the caped crusader didn’t make his actual first appearance in the magazine until a couple of years later, but the foundation was set. Also, Daffy Duck made his first appearance, but I’ll get to that in a minute. On the negative side, a vault fire in the Fox Film archives ended up destroying a lot of silent films, many of which remain permanently lost to this day, which is a bit of a downer.

Still, while it may have been a (mostly) great year for media, it wasn’t such a great year for aviation enthusiasts. By which I mean not only it was the year that Amelia Earhart famously went missing, but it was also the year that the fucking Hindenburg disaster happened! Oh the humanity.

In other pre-war news, Roosevelt won a second term in America, in Britain Neville ‘Peace in our time’ Chamberlain was elected into office, the Pope published a letter condemning Nazism, Stalin carried out a massive purge of people he considered ’anti-soviet elements’ and the Japanese captured the city of Nanking, eventually leading to the mass war crimes known as ‘The Rape of Nanking’. Also spam (the foodstuff) was invented. Why did I bring that up? Because I thought it was interesting and had nowhere else to put it.

Not going to lie, this was a pretty damn interesting short. If the Band Concert was arguably a precursor to the traditional Looney Tunes format, then this was very clearly a precursor to Disney’s Fantasia (which came out a few years later). Not just from the moments where the animation is clearly designed to be in time with the music, but just in general how the short is handled tonally, with the more serious story and toned down designs (boy it looks weird to see vaguely realistic animals in a Disney cartoon). And, like with Fantasia… I think it works.

There’s a strange atmosphere to it, an almost peaceful beauty that I really appreciate. It’s not constantly throwing things in your face and showing off, instead willing to simple take a step back and let you appreciate what it has to offer, building up the tension and energy of the story slowly but effectively. And yeah, I really liked it for that. So I’m going to give it a solid A-.

Main Feature: The Tale of the Fox 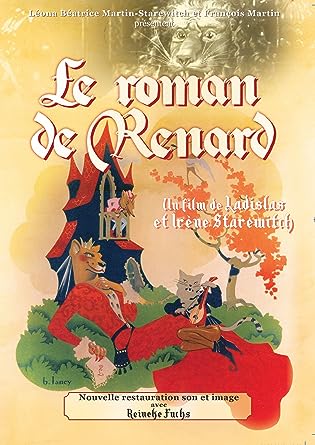 Plot:  A fairy-tale esque animated story told through puppets, in which a cunning fox tricks the other animals of the forest into inadvertently doing his bidding. It’s significantly less charming than it sounds.

Trivia: Though it was produced in 1930 but it did not released until 1937 when it got released just eight months before Disney’s Snow White.

Not going to lie, I may have been little too clever for my own good here. The idea of doing an infamous animated movie in 1937 that wasn’t Snow White (which I have actually already seen so it wasn’t eligible anyway) was just genuinely quite amusing to me. Plus it helped that I genuinely enjoyed the Adventures of Prince Achmed, another old-timey animated movie and thus was kinda interested to see what this forerunner to many stop-motion and puppet movies was like.

The answer? I didn’t like it. Not one bit.

A rather large part of this dislike actually comes from the titular Fox of the story. Now, if you’re not familiar with the story of this movie, as I imagine most people are, basically it’s a series of short encounters involving said titular fox using his wits and brains to outsmart and trick other animals of the forest who might mean him harm. I’m sure plenty of you can think of comparable examples from folk tales involving tricksters and the like, right? And as such, you should know it can sometimes be somewhat difficult to successfully thread the line between ‘heroic trickster’ and ‘mean-spirited pranks’.

Well, this movie doesn’t even attempt to thread that line with its protagonist, who starts off mean-spirited and devolves into a full-on monsterous serial killer as the movie goes on. And yet for some reason it also assumes we should be cheering him on for his horrifying deeds. It genuinely astounded me at the very end of the movie when it made itself clear that we were actually supposed to consider this guy a hero, rather than the Karma Houdini he actually was.

I mean, just for an example, take the first ‘trick’ of the movie that the fox plays on the wolf. The wolf is being sent out by his pregnant wife and young child into the freezing cold of winter to find some fish for them to eat. While out hunting, he finds the fox sitting out by a fire eating a big pile of fish. Now, in a good movie you’d imagine the wolf to attack the fox or try to steal his fish, thus setting him up as the bad guy and making whatever trick the fox pulls on him justified, right? Well, that doesn’t happen. The wolf just looks enviously at the fish and thinks to himself ‘Man, I wish I had some fish’. Then the fox approaches him and tells him that he has a surefire way of catching fish that he’s willing to teach to the wolf, via sticking their tail into an icehole. The wolf follows this method and ends up getting his tail stuck in the ice. Alright, you may be thinking, that’s a little mean-spirited, but mostly harmless, right? Well no. Because then the fox goes to a nearby human villages and fucking sets an angry mob on the helpless wolf! And again, I feel I should emphasise that this wolf literally did nothing bad to this fox or anyone. He was just looking for some fish for his family and ended up getting beaten by an angry mob in a sequence that I imagine is supposed to be humorous, but with al the blurry effects just comes off as horrifying.

Alright, you may be thinking, that’s kinda shitty, but one mean-spirited prank does not a horrible person make. No, I say in agreement, that particular trophy comes when he takes advantage of the newly declared law of the wild (wherein the King of all Animals declares that no animal may eat another animal (which is yeah kinda stupid, but fairy tale logic whatever)) to fucking kidnap, murder and eat a mother of three! I’m not even shitting you, we see a shot of her children weeping over her skeletal corpse! And this is supposed to be a kids movie! This is about the point where my sympathy firmly turned from ‘that fox is kind of a dick, but I can dig it’ to ‘I want that fucking fox to die horribly.’ And indeed, most of the rest of the movie is about the other animals attempting to arrest him for the legitimate horrible crimes he performed and him ’tricking them’ into getting horrendously hurt. I say ‘tricking’ because it’s less down the fox being a brilliant liar and more down to the fact that every single animal he meets is almost suicidally gullible.

Not even joking, one ‘trick’ the fox performs on the wolf again (who’s kind of a reoccurring victim in this story) involves the fox being stuck down a well. He gets out by tricking the wolf (who I should point out has no reason to believe the fox about anything, considering he already lost his tail to him) into believing that there is a goddamn portal to heaven at the bottom of the well and coming down himself to check it out. That’s not trickery, that’s the writer making everyone into idiots so the fox could win. Even the final battle, where the King of the Animals decides he’d really had enough of the fox’s shit and calls a massive army to besiege the fox’s home castle (momentarily fooling me into believing the fox might actually face some consequences for his deeds) ends up devolving into a long sequence of puppet animals falling for the same traps over and over and over and over again, to the point of frustration. And the fox goddamn wins and gets away with his shit too!

As for the animation itself, it’s not great. This is no Prince Achmed which, to an extent, still holds up to modern day viewing. The puppets and stop-motion in this are old and look old. The black and white nature of the movies doesn’t help, making it difficult to actively tell which animals are which at certain times. It’s fair for its time, I suppose and I can see how it might be the origin for a lot of modern techniques, but it’s hardly stunning looking.

In conclusion, if you’re wanting a famous 1937 animated movie to check then yeah, Snow White is much much better. D