I Want to Eat Your Pancreas 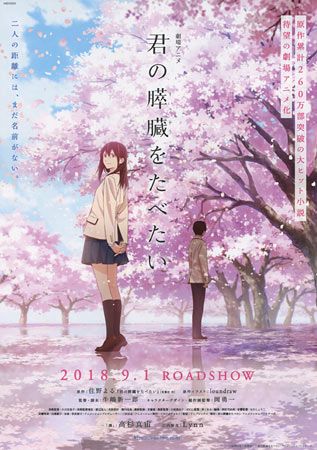 Yes, as much as the title may make it sound like some sort of Hannibal Lecter-esque horror movie, there is unfortunately zero actual cannibalism in this movie and only a tiny bit of actual (non-human) pancreas eating. In actual fact, it’s more of an emotional drama centering around a very introverted Japanese school student who accidentally learns that one of his classmates has a terminal pancreatic disease that she’s been keeping secret from the rest of the school. She decides to use this excuse to become friends with him and try to force him out of his shell before she dies. Because that sounds much more fun than a Grindhouse-esque horror romp, right? Hahaha…..

Honestly, to tell the truth, I wasn’t really expecting to enjoy this movie all that much. Dramas aren’t really my thing, especially ones with as clearly emotionally manipulative premises as this had. I mean, come on, terminally ill schoolgirl? That’s like a neon goddamn sign for emotionally manipulative shit. The only way it could get more cheap is if she also suffered from parental abuse or a drug addiction. Plus, while I wouldn’t say I despise the Manic Pixie Dream Girl trope, I am at least aware enough of its numerous problematic elements for it leave a bit of a bad taste in my mouth. So yeah, I had plenty of reasons to feel a bit skeptical going in.

Which was why I was honestly really pretty surprised by how much I really genuinely enjoyed this movie.

Now, don’t get me wrong, it’s not like this movie turned out to be something completely different from what I was expecting, like Penguin Highway or whatever. It covered the same sort of tones and themes and ideas that I was expecting. And I can’t even say that the main female protagonist didn’t technically fall into the Manic Pixie Dream Girl trope (even if the relationship didn’t ultimately end up quite being romantic). But I’ve always been of the opinion that’s there’s no such thing as an inherently bad trope, merely bad writing. And you can take tropes that so often appear as bad storytelling devices and make them good with good writing. And, as weird as it feels to say this sentence, ‘I Want to Eat Your Pancreas’ is really well written.

In hindsight, this probably should’ve have surprised me too much, since the story this film is adapting, originally a web novel, has already gone through numerous incarnations, such as a live action film and a manga, in a relatively short amount of time so something must’ve been highly appealing. And really I can see what. The film is well paced, well written, the relationship between the two leads (while seeming a bit basic romcom-y at first) eventually evolves into something a lot more complex and interesting and the film has an exceptional grasp of its own themes and underlying ideas and messages. Even if it uses a lot of tropes and storytelling devices that I’m not necessarily fond of, it uses them in such a way that I can’t help but enjoy them anyway. It made me laugh, it kept me engaged and, while I won’t say it made me cry (I’m really not much a crier at movies) it certainly made me feel quite a lot of something. If the original stories and live-action adaptations are all as quality as this, I can understand why the story is doing so well in Japan.

Yet, funnily enough, probably my biggest issue with the story (aside from one third act twist that I’m decisively mixed on) is actually related to the adaptation process, specifically the animation in the movie. Don’t get me wrong, it’s far from bad. It captures the emotion of each scene well enough and there was never a moment where the animation looked notably poor. It’s just that it came off as… well… rather bland to me. The two main characters have very generic designs (to the point where they could easily be used as background NPCs in another anime), there’s very little of the way of visual or directorial style and the one sequence towards the end where they attempt to show off the animation in a trippy and fantastical way just kinda came off as… eh. Maybe this is because I watched the movie right after Penguin Highway and Mirai, both of which had excellent visual/directorial style, but the animation in this just came off as bland in comparison. Again, it’s not bad and it gets the job done competently enough, but it’s the one C grade aspect in an otherwise A+ movie

Still, I really did enjoy this movie a lot. While it was more or less what I was expecting going in, it nonetheless managed to tell its story in a very good way and I never ended up feeling all that bored or irritated. And while I did have a few foibles here and there, including with the animation, there was never anything I outright disliked about the movie. So yeah, as weird as it feels to say, ‘I Want to Eat Your Pancreas’ is an excellent dramatic anime movie. Go watch it.

2 thoughts on “Film Review: I Want to Eat Your Pancreas”